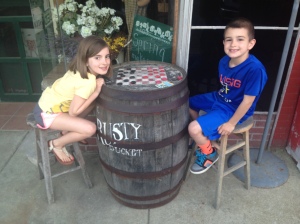 If you miss both the North Salem Street red lights in “downtown” Apex, North Carolina you will drive through the center in about one minute. Why then does such a small stretch of road, 750 miles from where I live, hold such a deep reservoir of fond memories?

The short answer is checkers.

My daughter, Katy, and my grandchildren, Molly and Jack, moved to the Apex/Cary area five years ago. My wife and I make certain to visit from our Rhode Island home a few times a year. Our times there are always a whirlwind of activities; Durham Bull baseball games, events in Raleigh and making the drive to swim in the ocean at Wrightsville Beach.

Yet, what thrills me most, and stays in mind longest, takes place on the circular top of an upturned whiskey barrel in front of The Rusty Bucket store on North Salem Street in Apex. Painted on the rough surface of this barrel top is a checkerboard. Young Jack, now six years old, loves to play checkers with Gramps at this spot. I think he and I start anticipating our matches weeks before Grammy and Gramps’ arrival. We started playing about three years ago. That first year I had to teach the then three year old grandson how the pieces could move, what “king me” meant and to not let go of a piece until you were sure of your move.

His Mom, Grammy and Sister were happily occupied spending time, and a little vacation money, at the All Booked Up and Gone Stitching stores which also grace North Salem Street. This affords Jack and me enough time for a few games which have become increasingly competitive as the years roll by. No longer do I have to teach. Now I have to be wary for Jack has learned how to trap me in a corner, he now spots every multiple jump and knows how to defend his back row. Next year I’ll give him my final piece of checkers advice. I’ll let him know he has a “tell”. When he has made a move that puts him at an advantage he raises his eyebrows above those beautiful dark brown eyes, which will one day drive the girls crazy, and Gramps knows to check the board for impending danger. Last year Jack told me he was learning chess. He’ll have to tell me how those pieces move!

At a certain point the females of our family, done shopping, will join us and we will head off for some delicious pizza next door at Anna’s a place that destroys my Northerners’ assumption that you can’t get good pizza in the South. Or, maybe we will cross the street to enjoy some wonderful comfort food at the Salem Street Pub. No matter which place we choose we will likely top off our meals with some ice cream at the simply named, The Ice Cream Store. Flavors like Birthday Cake and Superman for the kids and Vanilla Fudge for the adults.

Sometimes, after the food carnage, Jack and I will be informed that the ladies want to check out the goods in The Rusty Bucket. He and I will exchange quick glances and smiles while heading back to our checkers match.

Each year the paint on the game board surface gets more and more splintered and faded, to the point that setting up the pieces in the correct squares takes some concentration. I find this strangely reassuring and comfortable. Each year I’m afraid some red or black pieces will be missing, or even worse, the barrels will no longer be
outside the store.

Somewhere, way back in my family lineage, there was, supposedly, an ancestor who worked for a cooper. The story has it that he made, and installed, the round metal straps which secured the barrel’s wooden slats in place. I think of that long lost, perhaps even fictitious, relative as I sit on a wobbly stool in front of an old barrel playing checkers with my grandson Jack on a tiny stretch of North Salem Street in Apex, North Carolina which has become my favorite spot in the world.
– END –

Musings and reflections of a Commentary Writer.